based on the book Maja and me and Maja by Sreten Ugričić and inspired by the series of books for children Martine, by Marcel Marlier and Gilbert Delahaye, illustrated by Casterman

Ugričić’s book, written in 1993, focuses on the falling apart of Yugoslavia and the political changes in Europe, using the character of Maja and the specific atmosphere of the picture-book as a metaphor for a fairy-tale-like happy childhood which is coming to an end in the most brutal way possible. The performance applies a similar procedure, but its focus is on contemporary time. In this way Maja becomes an iconic figure which represents a happy past in the local and global context. The fact that Maja in the picture-book was from Brussels, the capital of the European Union, was equally interesting to the authors of the performance as her local resonance, from both the perspective of contemporary Europe and the perspective of the contemporary region of former Yugoslavia. (…) In contrast to the size of the production endeavour, the concept of the performance itself is of a seemingly paradoxical intimist nature.

(Anja Suša, director of the performance)

The author of the book (1993) Stevan Ugričić focuses on the falling apart of Yugoslavia and the political changes in Europe, using the character of Maja and the specific atmosphere as a metaphor for a fairy-tale-like happy childhood which is coming to an end in the most brutal way possible. Milan Marković notes that “Maja whom we know from the books, doesn’t exist. She’s a girl living in Brussels, in a rich family with brother, puppy, mother who travels a lot and constantly absent father.” Anja Suša directs a performance treating the character of Maja first of all as a phenomenon, a metaphor, a trope of the place of many of us being raised up in former Yugoslavia.

That’s why the costume is the thing that at the beginning of the show creates paradigmatic image of “the whole”, promising an innocent enjoyment in just-looking, boundless experience of unproblematized comfort of fullness, roundness.

It is made to be a ticket to a collective experience of remembering and through that it is very much in connection to Zygmunt Bauman’s notion on retrotopia, that appeared five years later and gave a ground for thinking behind the “Three winters”. In Maja&me&Maja, the director’s procedure of a look into the past that functions like a broken mirror or an image with an obvious mistake in it, plays in a wonderfully poetic manner.

Costume is built as an offer-sequence of fetish-objects from and of the past. It reproduces images from the picture-book in their seductive flatness of a surface.

It introduces parts of clothing that belong the childhood period for those born in 60ies and 70ies of XX century, the generation highly exposed to the content of these picture-books, counting intentionally on the sentimental effect of that procedure.

What happens next is scrutinising of the image set/postulated, disintegration of its parts through almost psycho-dramatic procedures of the characters and performers themselves.

Culmination happens through consummation of a symbol we agreed upon being the one representing Maja – a little red dress that multiplies itself. Everyone wants to be Maja and they “become” her, by putting the dress on.

At the very ending, it’s a tiredness that takes place – giving up on equating, identification.

Costume and its illusionism are being abandoned and the stripped body of a performer, with its simple presence and vulnerability, becomes the main happening.

In the light of the years passed by, I would say that Maja and Me and Maja dealt with the crisis of personal awareness of the past especially when faced with its ideological moulding in the present. Through the mode of open construction and deconstruction of memories onstage, the porosity of personal memories is turned into a communal experience of sharing and questioning in togetherness, that extraordinary premise that theatre is built upon. As the director of the play put it: “The project explores the post-Yugoslavian heritage and the possibility of continuation of intimate memory despite the discontinuity of the social and political ambient.” Onstage, personal memory is questioned, as if tried and failed in front of our eyes, faced with the context of collective memory which is obviously shaped by contemporary reality.

The visual of the performance is hugely inspired by the imagery of Martine picture-books by which I myself was completely taken and seduced by, during my entire childhood.

The first edition of Martine was published in 1954 in Belgium and was followed by more than 50 books which have been translated into numerous world languages, with the main protagonist having different names in different countries (Martinka, Emma, Debbie etc). Yugoslavian version of the character was named as myself. Maja (Maya) was hugely popular and therefore had considerable influence on many generations which grew up during the seventies and the eighties of XX century.

The books contained illustrations of a beautiful upper middle-class little girl who spends most of her time in unelaborate absence of her parents. She is exploring a heavenly adorned reality of modern kitchen appliances, luna parks, airports, woods or shopping malls, sometimes accompanied by a dog, a cat or a boy named Misha. The authors of the performance undertake a serious digging into their own experiences of the past and knowledge about it. The stories adorned by sugar-coated imagery about a female child practically being raised by herself (and the world of the goods among which she is placed), are being transformed by that very knowledge. What is gained on the way from the hope of Yugoslav children for the same beauty as of a Belgium child, is a disturbing ring to the perfectionism of the seductive ease. The crack are to be seen: the faces and the situations, the emblematic costume sets as well as the relations, melt before our eyes as 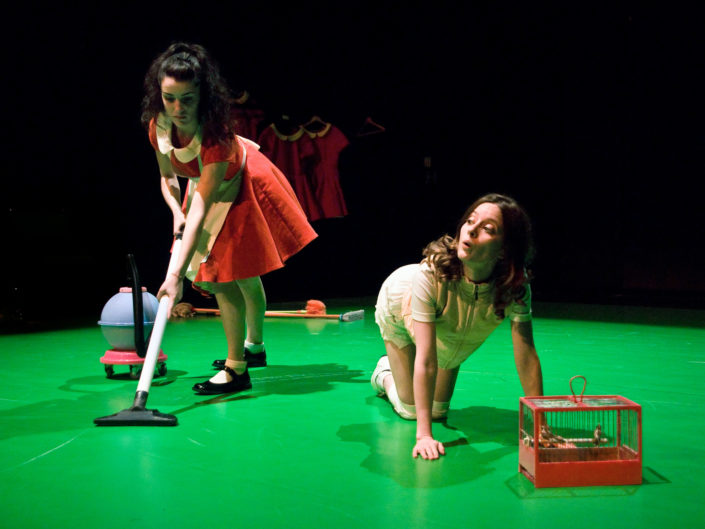 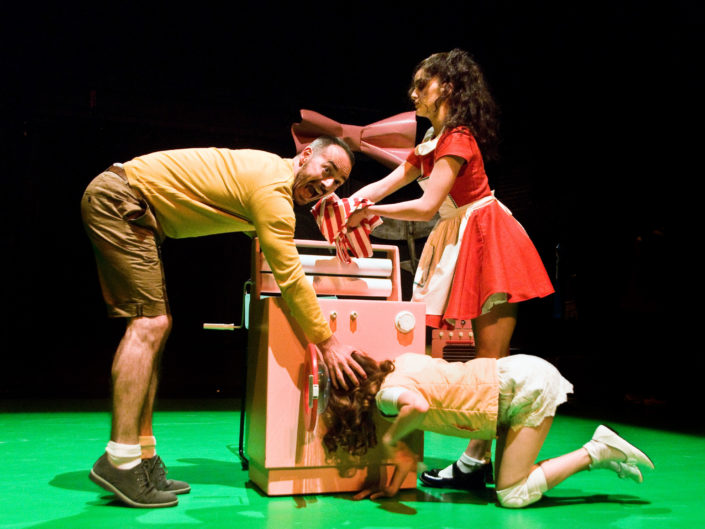 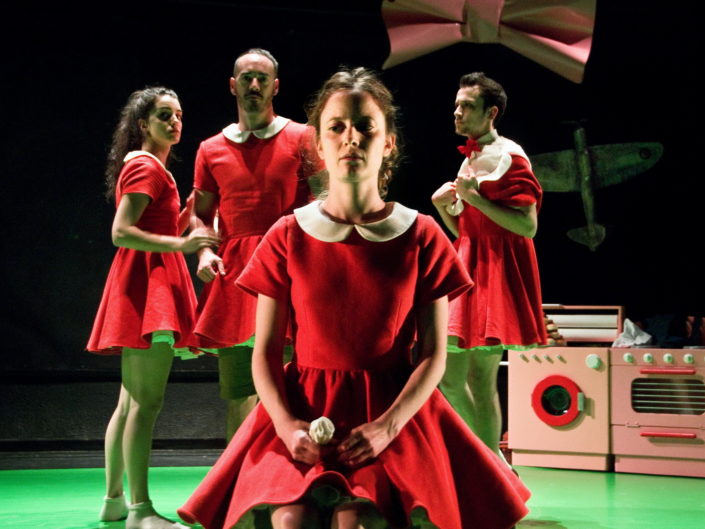 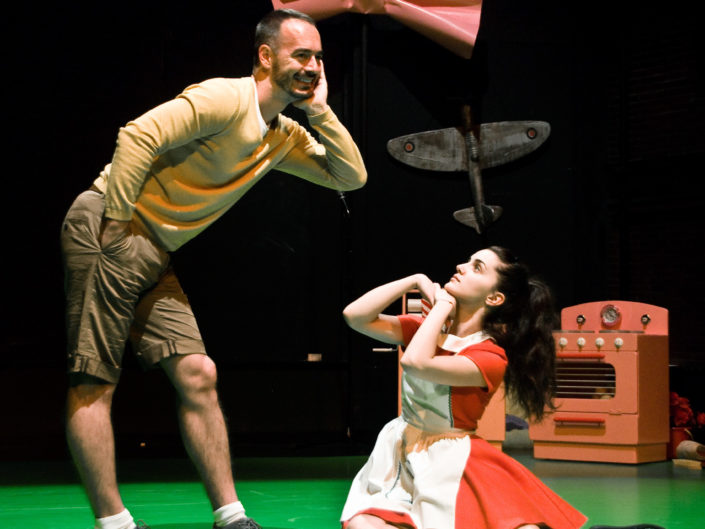 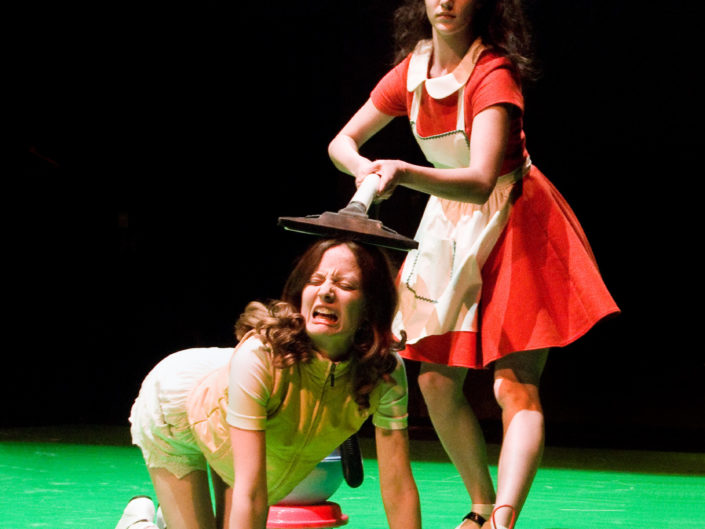 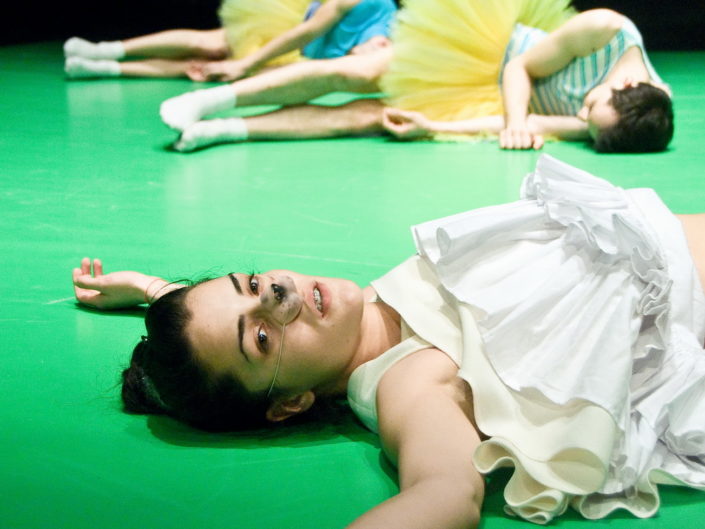 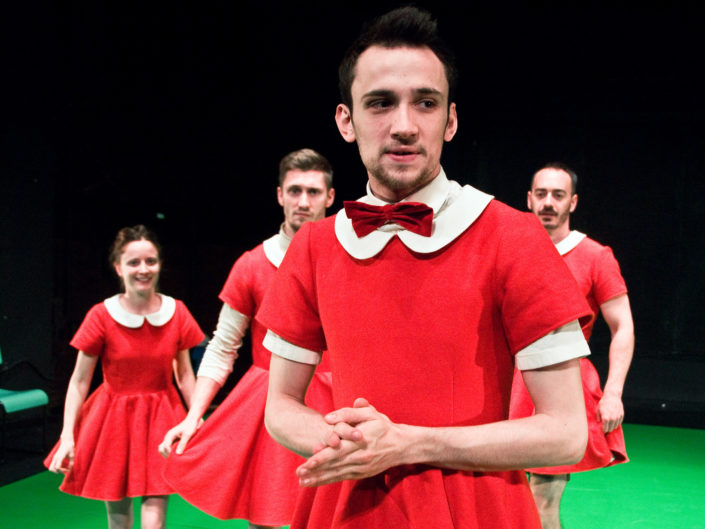 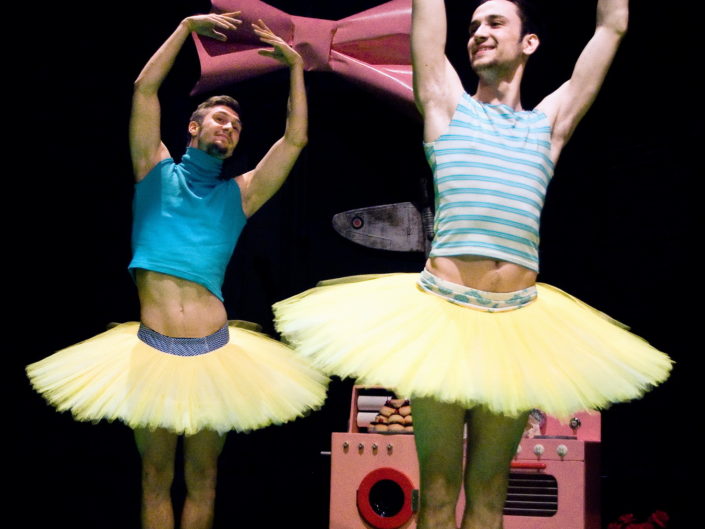 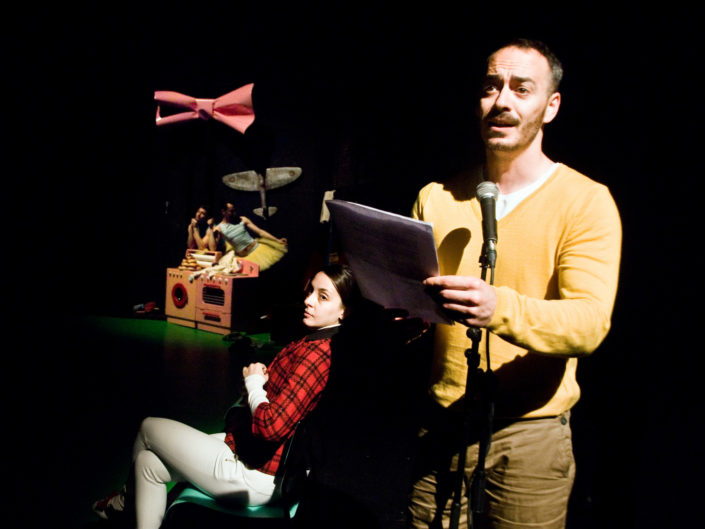 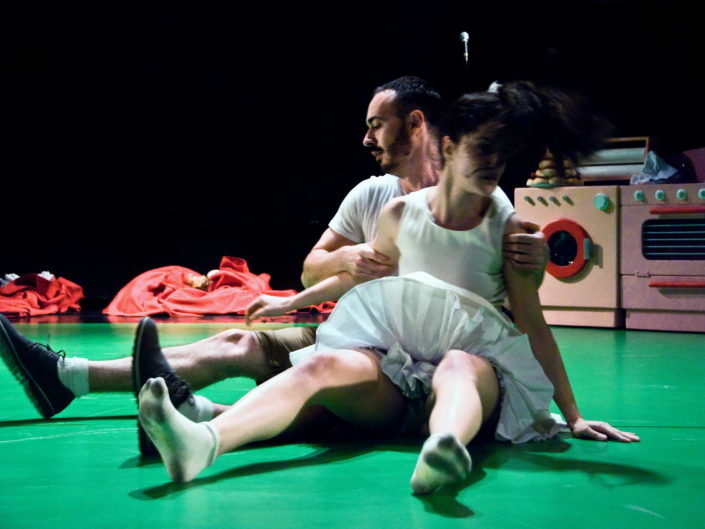 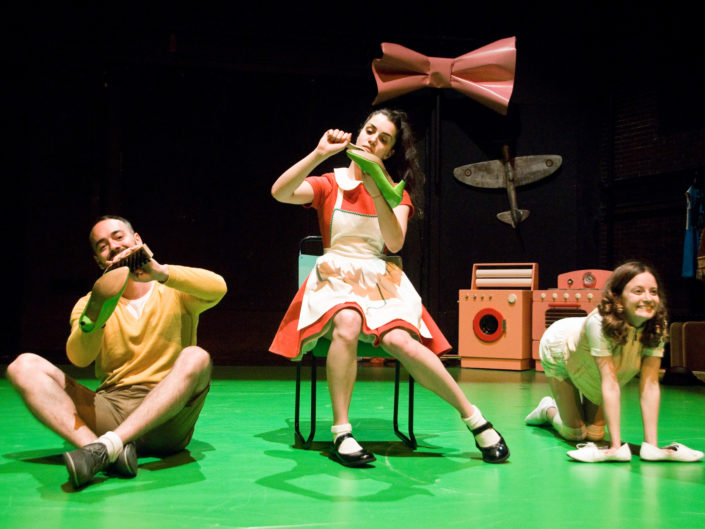 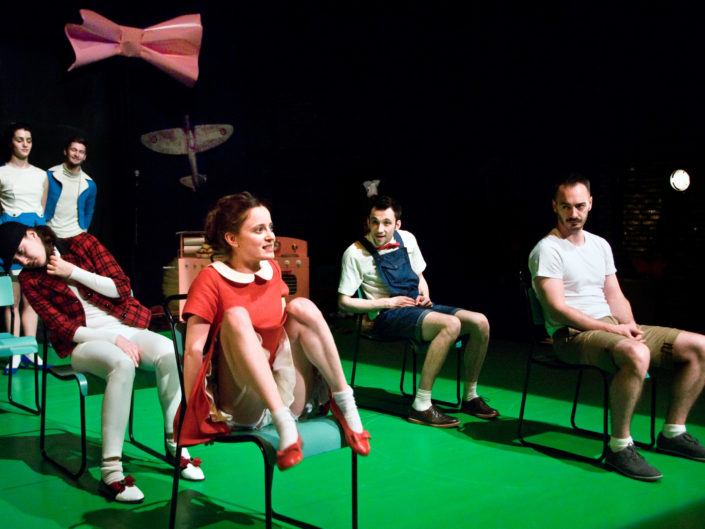 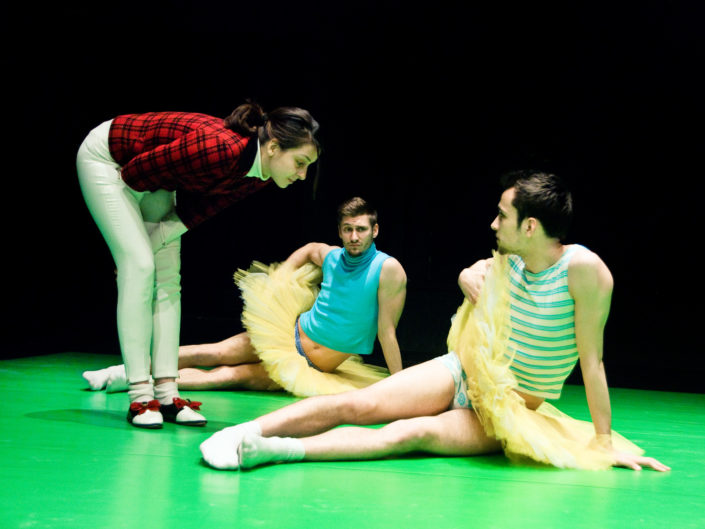 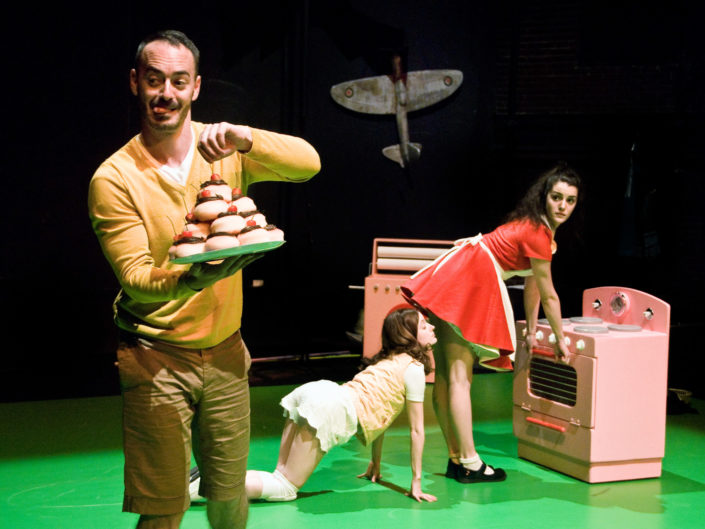 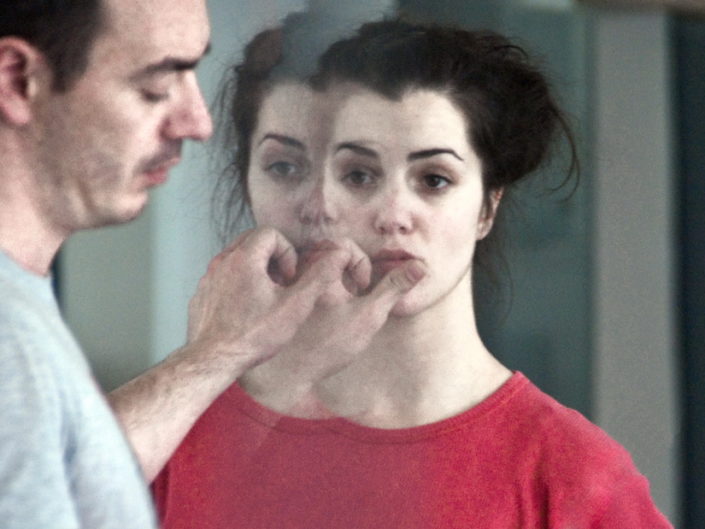 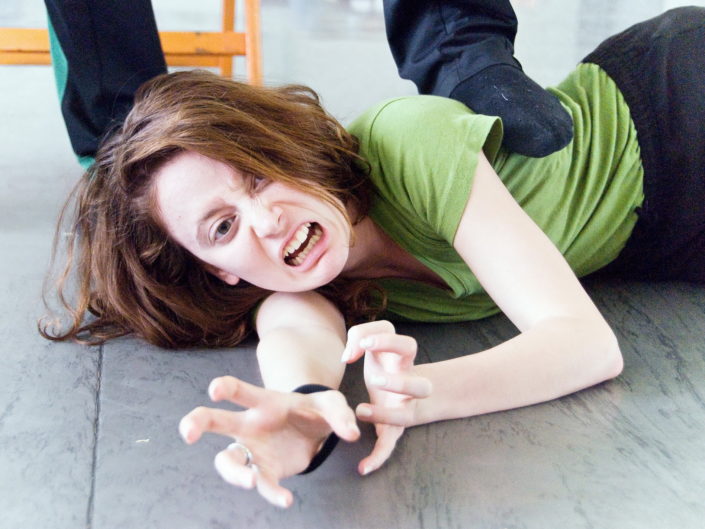 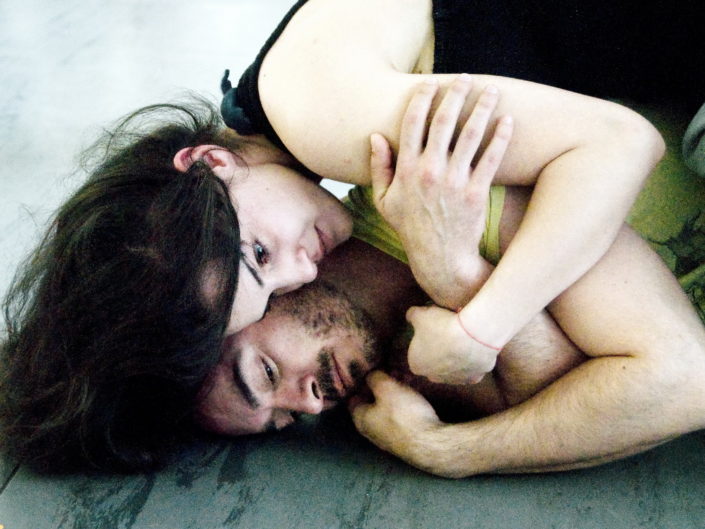